The Director of Public Prosecutions

The Director of Public Prosecutions 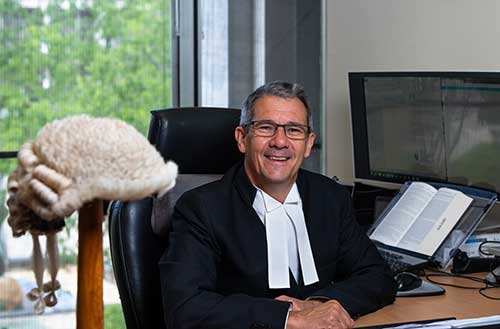 Shane Drumgold SC took office as the ACT’s 5th Director of Public Prosecutions on 1 January 2019. Mr Drumgold has been a prosecutor at the ACT DPP since 2002. He was appointed the office's first Senior Trial Advocate in 2009, Assistant Director in 2014, then Deputy Director in 2017, during which time he prosecuted many of the ACT’s most high profile homicides.

Mr Drumgold has a Bachelor of Economics, Bachelor of Laws (Hons) and a Masters in International Law (ANU), and is an Adjunct Professor of Law at the University of Canberra. In 2003, he was awarded a Churchill Fellowship to study restorative justice in indigenous communities in the US, Canada and New Zealand, and has worked as a Public Defender in the Solomon Islands. Anthony Williamson was appointed as the Deputy Director in August 2019.  He has been a prosecutor with the Office since 2009.  Before that he was a legal officer in the criminal law and human rights units in the ACT Justice and Community Safety Directorate.

Mr Williamson has a Bachelor of Laws and a Bachelor of Arts.  He is a native Canberran and has spent more than 20 years as a volunteer fire-fighter in the ACT Rural Fire Service. Joel Hiscox became Assistant Director in May 2019. Mr Hiscox has been a prosecutor at the ACT DPP since 2007. During his time, Mr Hiscox has held a number of key non-executive prosecutorial positions within the office including Family Violence Supervising Lawyer; Allocations Manager; Magistrates Court Practice Manager; Supreme Court Practice Manager and Senior Advocate. Prior to 2007, Mr Hiscox worked in a private suburban law firm in the southern suburbs of Sydney, with a focus on litigation.